The bodies of a man, drowned in wine, a mechanic, and a priest – how are these deaths connected? And what do we really know about the people investigating them?

In a remote village, a body of a man is found, floating in a pool of wine inside the cellar of a small cottage. Only he didn’t drown, but was shot, as the inspection team, lead once again by Taras Birsa, soon realizes. The investigation follows false clues and petty rivalries, that might be common in those parts of the country, but could hardly have been the reason for this murder. Soon, another body is found, this time on the other end of the country: a mechanic in his shop with a tire around his upper body. Unable to find a real connection between the two murders – apart from the presumption that the same weapon was used both times – Taras realizes that there might be a pattern. Since both murders happened on the same day of the week, exactly one week apart, a new murder might be committed soon.

However, while the police have been pondering the question of whether they should try to prevent the next murder or simply stand by, hoping to get more clues, everybody’s lives are turned upside down by the pandemic. With quarantines and preventive measures in place, people are trapped inside their houses, their movement at best limited to the bounds of their municipalities – including Taras and the killer. But soon enough, a third body is found, a priest, lying dead in a church. Seeing beyond uncovered secrets and corruption in parishes, prisons, and psychiatric hospitals, Taras and his team finally discover the killer, preventing a fourth murder.

Though doubtlessly an enthralling mystery, Tadej Golob’s Virus is also a compelling study of characters, written in masterful prose, full of local details. Golob is exceptional in bringing every character to life, detailing their troubled pasts, their families, their hopes and desperations. In this sense, Virus is a striking depiction of Slovene society, including broader topics, such as politics and corruption, as well as personal struggles with alcoholism and securing a home for one’s family. 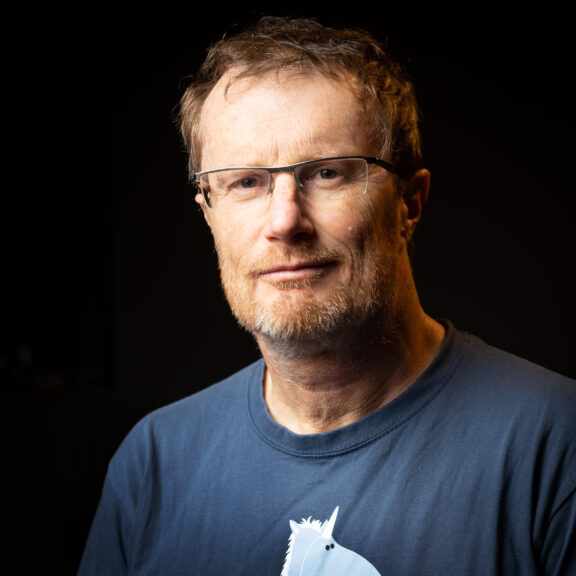 Tadej Golob (1967) is one of the most unique Slovene authors with thematically very diverse scope of works. He appeared among the writers with a book Z Everesta (From Everest) (2000) where he describes Dave Karničar’s skiing from the highest mountain of the world, a mountain that the writer also ascended, and continues with biographies of Peter Vilfan (2004), Zoran Predin (2009) and Goran Dragic (2015), with novels for youth Zlati zob (Gold tooth) (2011) and Kam je izginila Brina? (Where did Brina disappear?) (2013), and with novels for adults Svinjske nogice (Pig’s feet) (Kresnik award 2010 for best novel) and Ali boma ye! (nomination for Kresnik award 2014). Jezero (Lake) (2016) is his first crime novel.