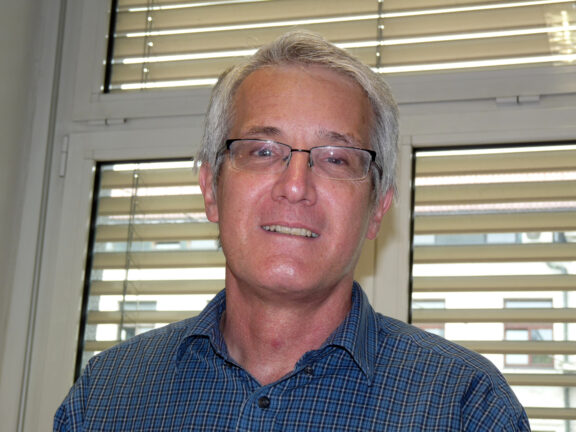 Andrej Hočevar, April 3, 2022 in Interview
Tags: Boris A. Novak, The Doors of No Return

An interview with the translator Michael Biggins, who co-edited Boris A. Novak’s English translation of a selection from the author’s fascinating epic The Doors of No Return.

Boris A. Novak is considered the foremost master of poetic language in Slovenia, having written in countlesspoetic forms – including several he invented himself – and famous for his maxim “in poetry, sound signifies,and reason resonates” [zven pomeni, pomen zveni]. What was is like, working with Novak’s language in the translation?

As a reader, I am simply in awe of what Novak has been able to create in this work. Awed by its vast scope, by thevariety yet overall cohesiveness of its many subplots, by the granularity of evocative detail presented in its countless episodes, and by how aptly all of this has been captured in one or another verse form by turns, where style and substance go together so well they seem almost effortless.

As translator, I was more often than not frustrated by my inability to sustain strict rhyme patterns as consistently and felicitously as the original does. They say the morphology and syntax of English make it less productive of rhymeoptions than most Slavic languages, which is undoubtedly true. English has fewer sequencing options for constructing essentially the same sentence, and it has no case system, which is what produces the endless array of rhyme options that Slovene has. As a result, even the best contemporary formal poets in English occasionally produce lines that aredense, strained, or precious. I drew some consolation from the prominent role that unrhymed, blank verse has played in English literature from the times of Shakespeare and Milton down to the present day, and tried to make the most of meter, internal rhyme, and alliteration, alternating those irregular forms with end rhyme in certain poetic episodes that simply demanded rhyme, without which they would have refused to function at all, even in English.

Novak’s monumental epic is impressive both in scope and content. Reading it in the US, which subjects andtopics did you find of particular interest to a non-Slovene reader?

I hope non-Slovenes will be fascinated by the same spectrum of eternally relevant subjects that has captivated the books’ Slovene readers. After all, one doesn’t normally wonder about how Chilean or Canadian, as opposed to contemporary Greek or Italian readers, will respond to the Odyssey or Dante’s Inferno. Those cultural artifacts are simply facts of the landscape and have been of universal human relevance for anywhere from 600 to 3,000 years. Readers anywhere should have no problem at all letting themselves be drawn into the varied world that Novak has created – or recreated from the depths of his own life experience and imagination and received, intimate knowledge of his extended family’s – his parents’, grandparents’, great-grandparents’, aunts’ and uncles’ – eventful life stories from the late 19th to the early 21st century.

By opening the epic in an otherworldly but actual desert setting in Australia, of all places, he announces, composer-like, the cosmic key that will dominate the entire work, preemptively neutralizing any hint of provincialism. After that, the specificity with which he evokes places in Slovenia, the Balkans and elsewhere in Europe that become the settings of various episodes similarly universalizes them. In a marvelous early passage, Novak’s epic narrator indulges in an extended fantasy unfolding of the family tree, reaching back a dozen generations or more, conjuring with a line ortwo an entire history of generation after generation. 44,000 lines of epic verse sounds crushing, but in fact the pace is so varied, the stories so expertly told, that reading it should be effortless.

One of the epic’s overriding themes is the collision of tradition with modernity that the world has been living through for some five hundred years and that seems not to be finished yet – or rather, which seems to have reached a point of deadlock. The assault of the secular on the very concept of the sacred, the backlash by sacral institutions provokingstill greater secular fervor, leading to ideological fanaticism and the rise of science and man as the new godhead, the promethean ambition and overreach that disfigured the 20th century, ultimately claiming tens of millions of lives, played itself out nowhere more overtly and devastatingly than in Europe, and there most of all in the “bloodlands” of East Central Europe, as historian Timothy Snyder has called them. In this context, what might make Novak’s verse epicparticularly interesting to American readers is the extent to which Slovenia’s 20th-century tragedy is shown to haveturned on the country’s own internal social polarization as much as it has on its struggle against hostile foreign powers. American society today is more divided than at any time in its history since the Civil War.

But every unhappy society, to steal a phrase from Tolstoy, is unhappy in its own way, and that uniqueness is what makes each such story from beyond our own, familiar societal framework uniquely interesting and above all accessible. We as outsiders have no stake in the conflicts of the others we read about, even as we discern in themcontours and dynamics that are uncannily like what we experience first-hand in our own lives. Although the epicnarrator of The Doors of No Return professes his atheism, a persistent theme and aim throughout this epic is “soul” (duša) and what I take to be a conviction, expressed over and over, that life without it is meaningless, and that the neglect of it in modern times may be at the root of much of our present anomie.

The epic has a unique place within the context of Slovene literature. How does it relate to contemporary poetry in the US? Have there been any similar projects or developments?

I don’t think there’s been much in the American tradition that can compare with Novak’s epic. Creating a continuous, coherent work of this scope in rhymed verse is an extraordinary and, frankly, a daring thing for anyone to do. At several points in the epic, Novak as narrator steps back to reflect on the “madness” of his endeavor. Myunderstanding is that he worked on The Doors of No Return for close to twenty-five years. I can only imagine the intensity of that engagement over a quarter century, how obsessive it might become or at least seem to have become.

The line count alone of all three books of Novak’s epic makes it roughly equivalent in length to all forty of Shakespeare’s plays, laid end to end. And to think that the majority of lines in Shakespeare’s plays are written eitherin prose or – and this predominantly – in blank verse – which is elegant and definitive for the English language, but stillunrhymed. James Merrill’s The Changing Light at Sandover, which is also a trilogy of narrative, if not epic poetry detailing his and his partner’s years-long experimentation with spiritism, and Derek Walcott’s Omeros, set in the Caribbean, are the only examples of epics by leading contemporary anglophone poets that I’m directly familiar with,though at 500 and 300 pages respectively they’re slight by comparison with Novak’s Doors. To be sure, epic poetry continues to be written in English, but it’s been more on the periphery than in the artistic mainstream. One Anglo-American epic poet whose work intrigues me, now that I’ve worked on Novak’s text, is Frederick Turner, who, like Merrill and Novak, has used the genre as a vehicle of the individual’s persistent quest for something transcendent.