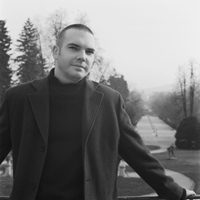 Sebastijan Pregelj was born in Ljubljana in 1970. He’s been publishing stories in literary publications since 1992. His first novel, Burkači, skrunilci in krivoprisežniki, was published in 1996, followed by a short story collection. His work was included in the Čas kratke zgodbe anthology, which was translated into German and Czech. He loves and works in Ljubljana and is a member of the Slovene Writer’s Association.